This was both Brent and my first experience riding the Amtrak. Amtrak. Another government success story. Bailed out and never profitable since. Nonetheless, we were impressed by the efficency with which they moved the train. We were an hour early (totally unnecessary) and almost missed the train, it came in and out so fast! We upgraded to business class, well worth the extra $100. I slept for the majority of the trip and Brent conversed with the submarine captain sitting across the aisle. 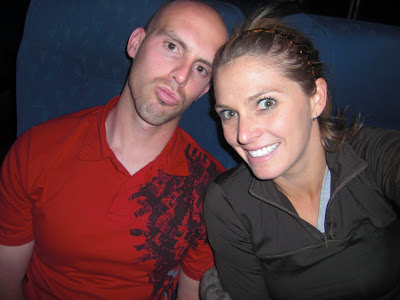 One of my favorite things about this trip was the food. It seems every where I turned in NYC and Boston I could get a fabulous salad. Salad's with gourmet cheeses, nuts, and exotic lettuces.

Our first evening in Boston, we met a local lady wandering up and down the streets searching for food. She walked us to this great Italian restaurant Piatini's. It was run by a young Italian family, who spoke with thick accents and scoffed at the idea of fried calamari. We had an amazing arugula, lemon and basil salad. We actually returned for seconds the next day. It inspired a recipe creation this week. I will post it in a few days. Below is Brent, sitting on the little patio of the restaurant, looking up at the old Brownstones in Back Bay. 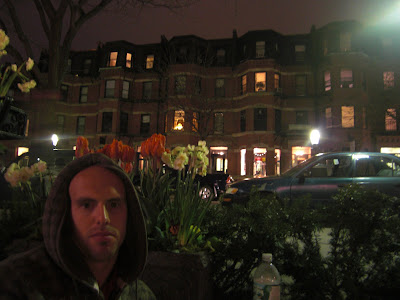 Amidst all this fabulous cuisine was a resounding failure to delight any senses. We sought an authentic experience on the water, with fresh fish. We were told by a different local, the No Name fish restaurant was the best in town. It was a culinary and aesthetic catastrophe. In the photo below, before dinner, I was still chipper, anticipating the best. All the workings were in place...right on the fish pier, overlooking the water, seemingly undiscovered... 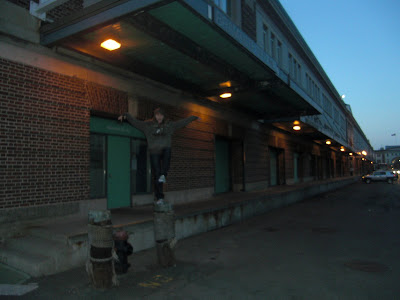 My first clue was upon walking in, I was directed by a woman in jeans and a dirty apron to sit down wherever I wanted. Then our waiter, which it was very unclear if that was actually what he was, put down a couple paper cups and a "pizza hutish" water pitcher. At least over 70 years old, he walked as if he had been throwing fish from deck to pier for a good 50 years. His accent, completely unrecognizable to myself, led me to believe he had just stepped off a boat from somewhere. Over the course of the evening he actually became frustrated and a bit hostile when I questioned him about the menu. (The menu being a piece of paper with the words, "Salmon, Herring, Cod, Shrimp and maybe another word or two, typed on it.)

I ended up with a decidedly fresh piece of salmon, steamed on a piece of tin. Complete with a side of lukewarm reheated frozen veggies. It was brutal. 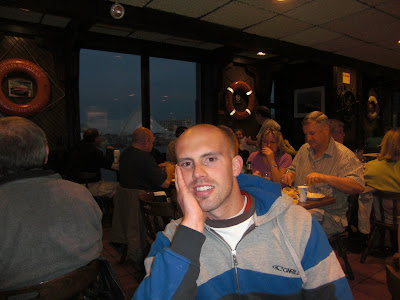 Pay for the Guide...especially if he wears tights

A rule we live by on vacation....always pay for the guided tour, whether it be the double decker bus with the Brooklynite or Nathaniel Williams the "hat maker" friend of Paul Revere. It's always fun to get the inside scoop. For example just six weeks ago, right behind the tombstone you see, an unsuspecting tourist fell into an undiscovered crypt! 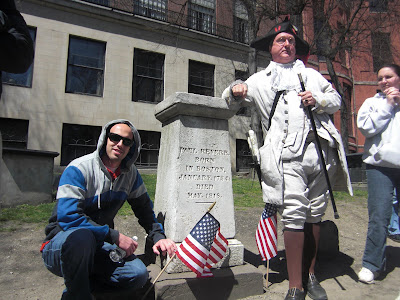 James Otis, a patriot, forgotten by many including me until this little tour, who coined the phrase "taxation without representation." Clearly a clarion call in the revolution. 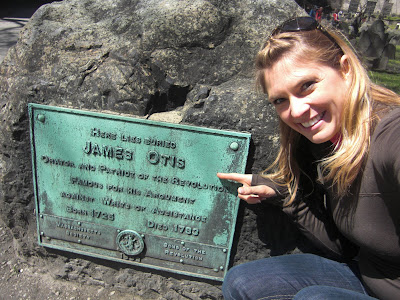 The Old State House. Standing below that balcony, you could have heard Thomas Jefferson read The Declaration of Independence for the very first time. 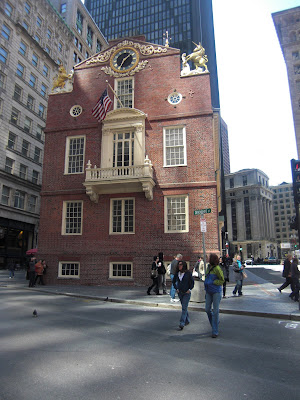 Monday Brent got a little trigger happy with the camera. He had me posing left and right through the city and along the St Charles River. Here are a selected few, because ultimately this is a family blog. He was trying to train me the entire trip to get away from the "bug eyes" I have such a propensity to flash for cameras. 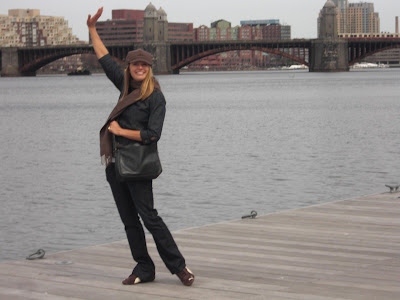 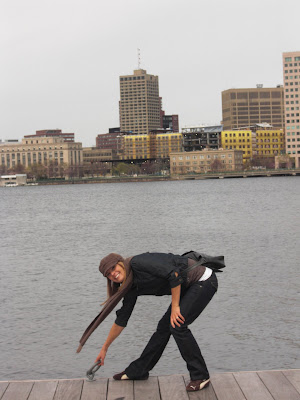 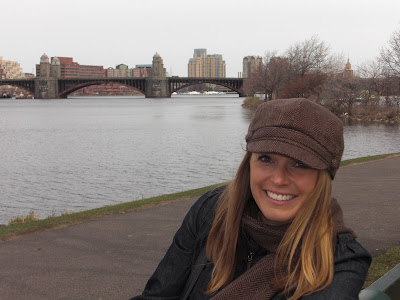 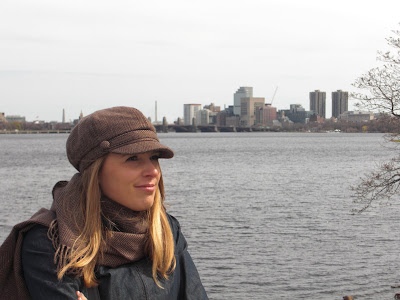 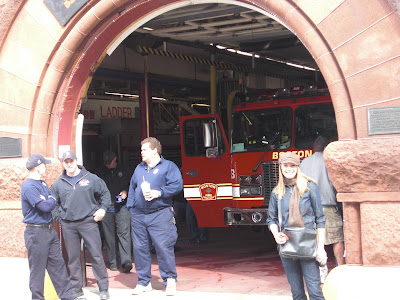 My favorites are the couple we have together... 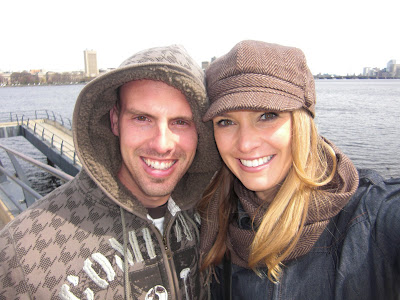 I must admit, I woke up Monday morning and ran 8 x 800's along the St Charles River, and as I ran back I came face to face with the Megatron. I fought back the emotions. It was difficult. 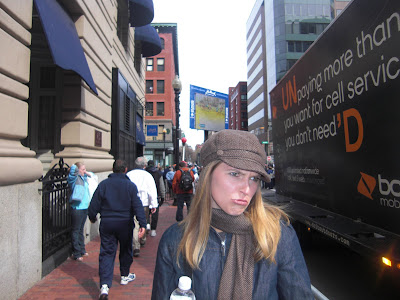 Behind me is the finish line. 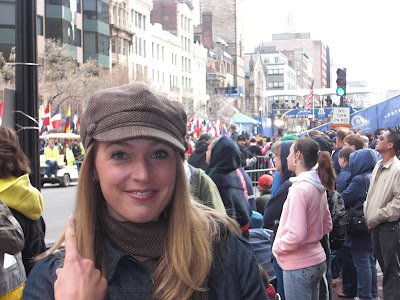 I decided to not to pay the price for my propensity for procrastination again. I put it behind me and thrived in the atmosphere and excitement that is the Boston Marathon. Spectating was amazing. I found this spot with about a 1/4 mile left. My adrenaline was pumping as I waited for Marie. When she came out of the tunnel I started screaming and running along the side. The people around me were laughing but who cares! 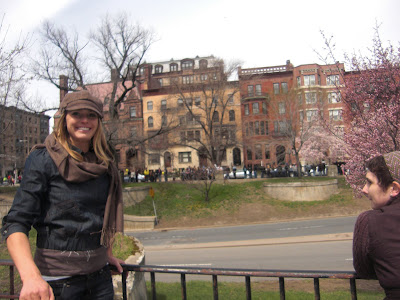 It wasn't until this corner below, she finally saw me. Here I saw Julie, McKay and Andy. The only friend I missed was my true blue St George running partner Camie :( These amazing individuals came in with Marie starting at 3:05 and then Julie at 3:11. #2 and #3 from Utah, top 200 women overall. Amazing. 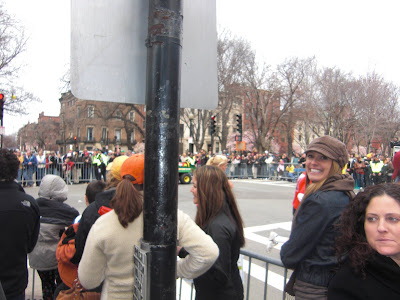 After the marathon, we literally crawled though the window of a firestation to evade the masses of people, back to our hotel. To the airport, and home. Rejuvinating, romantic, and regular. Regular occurence is the new goal. And now....reality! But that is fun too.
at 6:10 PM

I'm glad you had so much fun! I hope you left some sights unseen for our awesome trip next spring.