Sweet Pea, Apple of my Eye 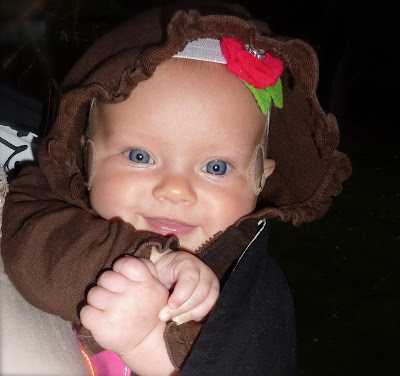 After a great deal of turmoil, we decided to go ahead with Berkeley's ear tube surgery and bronchoscopy yesterday. Things went well. As anticipated both ears were bursting with thick fluid. The poor lamb was very startled by noises yesterday in the hours after the surgery. When it was time to begin the bronch, the pulmonologist found the scope was too large for her little lungs. Instead they flushed her trachea to collect the secretions, a far less invasive procedure. I was grateful the full bronch wasn't done. Berkeley was in her best stretch ever, 8 days without oxygen. A full bronchoscopy would have really set her back. Thankfully she did not have to be admitted and came home within 5 hours of the procedures.
By the picture below, you can clearly see she didn't know what was about to hit her as we sat in the hospital. In fact, her pulmonologist said she was flashing smiles at everyone up until the moment she went under anesthesia. 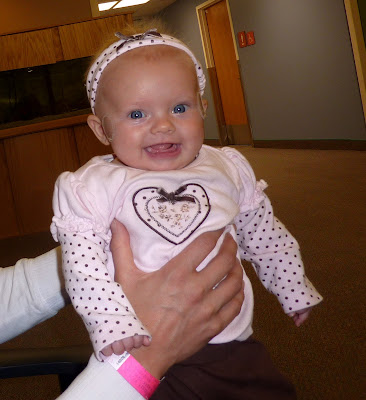 Today she is recovering. Her oxygen needs have increased but they will hopefully rapidly decrease again. There is finally consensus among the doctors about the PCD. People tell me I should feel vindicated. But really there is no glory in finding out 3 of your 4 children have a lifelong illness of which there is no cure. Honestly, I am not sure how to feel. It is very difficult for me not to be angry with the physicians of the past 7 years. I am thankful we will begin treatments for the children. This will hopefully prevent lung damage in the two younger children and slow the progression of the disease in all three. The idea, like cystic fibrosis, is to keep their airways clear of fluid. To do this, Ellery and Emmett will begin wearing a percussion vest 2x a day, and I will continue manually "pounding" Berkeley. I think the girls will up their gymnastics to 3x a week and Ellery is beginning the flute. 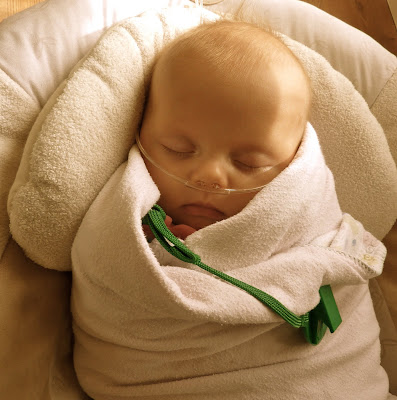 The last seven months of my life have been the most challenging I have yet faced. It is so difficult, as my mom and dad would say, to "not climb the inference ladder." I wonder about what it will be like when my daughters and son are my age, trying to raise their families. In one of my weaker moments I expressed to Brent I didn't feel I was really "enduring to the end" very well. My heart feels so heavy sometimes. He reminded me that Christ during his ministry didn't run around ultra cheerful. He often wept. As I do. He often pleaded for his friends just to be near and listen. As I do. He even pled with his father to take the pain away. As I do. If he who is perfect was allowed to grieve and plead for relief, maybe it is okay I do.
at 1:20 PM

Oh Becca, you're one of the strongest women I know! And who said "enduring to the end" needs to be pretty? I'm so glad you'll be able to start treatments for your kids. Hope we can talk soon!

I agee with Brittany...you are much stronger than you give yourself credit for. It's ok to be frustrated and sad over something that is so dear to you. I love you. Still always thinking of you and praying for you!!! Glad the surgerys went well with Berkeley. Keep hanging in there my dear friend!