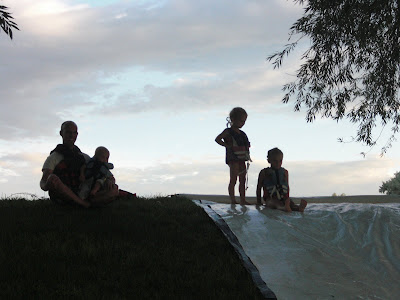 I will not be posting yet more pictures of myself in my lavender and gray triathlon outfit. I think we have all seen enough of those....But the race turned out far better than I anticipated!

We brought the whole family up to Idaho for the first time for this race. We splurged with a stay at the local Marriott. The kids had a blast swimming until all hours of the night. We also spent a great evening at Brent's friend Ryan's childhood home in Burley. 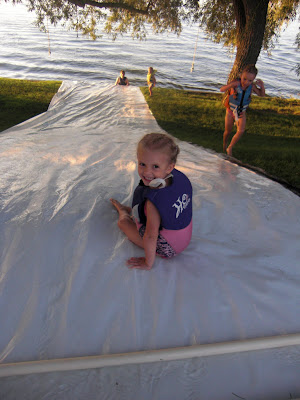 The girls demonstrated exemplary bravery in barreling down this "slide" into the Snake River. They couldn't get enough of it. Ellery even flew on the rope swing into the river. 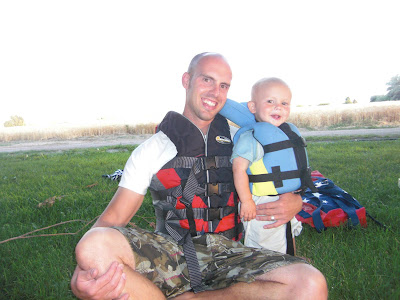 Goo Bear was happy as a clam with his father on a jet ski. He even took a spin with me. Their private dock and play area was wonderful for the kids. We had a great time. Thanks Ryan! 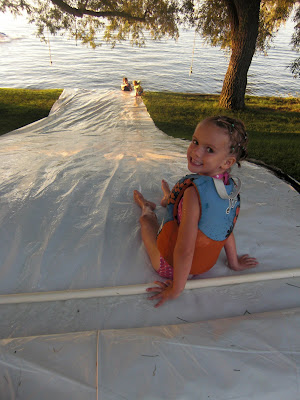 So...about the race. Back in January I set some fitness goals for myself. For the Spudman I wanted to conquer my fear of the open water swim and achieve a PR. Proud to say....Mission Accomplished! In fact, with flying colors.

This is the best I felt about a race since the St George Marathon last October.

Here is the breakdown...

Prepping for the Swim

The day before I decided to jump in the river and swim a portion of the course with my wetsuit. I am glad I did. Just looking at the water flooded me with a wave of fear, reminiscent of last year. Read about it here. After a couple minutes of swimming and breathing I was under control. I spent about 20 minutes in the water floating around...dragging Ellery on my feet, fighting the current to come back upstream. I also tried to find the current. My friend Desiree (a former river guide) gave me a great tip. Look for the bubbles on top of the water. There you will find the current. It worked! Finally I felt confident.

My nerves were definitely on notice but I wasn't cold this year and that made a huge difference. I swam the entire course without a single pause for breathing or navigation. I did lose the current for 6 or 7 minutes but finally found it again. I ended up shaving 2 minutes off my swim time......16:58.

Transition 1: Wow I wish I had a Picture!

As I rushed out of the water, I pulled my wet suit top over my head (I am a force to be reckoned with in "The Black Pearl" you are laughing at this comment if you have seen me in "the black pearl") and it got stuck. Of course being the competitive idiot that I am I continue running blinded by the black pearl...and head straight into the fence.

Now this, I really wish I had a picture of. The race official was concerned and started trying to see if I was okay... thankfully the adrenaline was pumping and I finally just kept running. Now I have the bruises, cut and swollen elbow as proof though. Miraculously, I only added 3 seconds to my transition time from last year.....2:26.

The bike course was pretty brutal. After 5 miles I thought to myself "I have 20 more to go." Thankfully there was an ultra tall girl just beyond me and I pumped my guts out the whole time to try and keep up with her. Unfortunately, I got a snazzy new bike this year (that part is fortunate) and my rear end does not love my expensive new seat. Maybe it is too big (my rear that is)? My muscles were very tight. I came in at 1:09.24 thirty seconds faster than last year. This was a huge disappointment to me until I learned the course was actually over a mile longer than last year! They had to make a last minute change to the course because of gravel.

Most excrutiating of course was the run. I'm sure it is because of the fatigue. I was aiming for 7 minute miles, I came in slower than that at 46:35. I was frustrated most of the run, trying to push my body but it wouldn't go. I crossed the finish line and ended up collapsing again. Sigh...memories of Ogden. My legs were so exhausted I couldn't hold myself up. There is something invigorating about having nothing left in you at the end of a race. After just a few minutes I was fine. For all my frustration my time over 2 minutes faster than last year. I passed a bunch of women and hoards of men on the run. There was one woman who sailed past me. She came in at 4o minutes. Wow.

My overall time... 2:16. Five minutes faster than last year on an average 3 minute longer course. I'm counting this as an 8 minute PR.

My overall finish was the 13th woman. Up from 23rd last year. This year I was only 6:15 seconds off the winner. Last year I was 17 minutes off. Not a bad showing.

I also won a random bag of really cool prizes. I don't know how, but a semi-odd, rather homely looking race official just gave it to me. Tires, wireless bike computer, specialized jersey...nice stuff.

On second thought...this is a brutally long post without pictures. Probably some pics in the lavender duds would have helped.
at 6:26 PM

Way to go! You rock, seriously so impressive. My running these days is kinda shabby.. I'm more of a run 2 miles, walk 2 miles... definitely not as hard on my knees. THat's got to feel like such an accomplishment to see you time dropping like that. congrats!

Congratulations!!! I'm excited for you. I bet it felt so good to get a beat your time last year and come in 13th! That's impressive!

I have an amazing sister. love brock