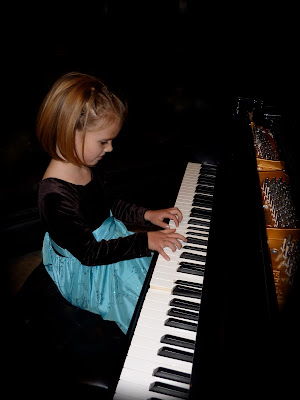 Ellery began taking piano lessons in June, soon after she turned 6-years-old. We are very proud of her. Today she attended and performed in her first recital. She was as confident and together as ever. 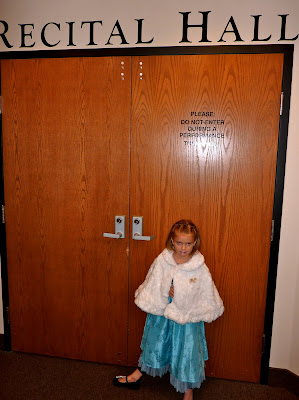 She was quite nervous when she saw these big doors. I think her fur cape gave her some added confidence.
Piano began with a great deal of enthusiasm. After about 6 weeks the practice meltdowns started. Two weeks of that and I thought I was going off the deep end any minute. I called her wonderful teacher, who is the most positive, loving teacher, I have ever met or seen in action, and she gave me some pointers. Since then, things have only been onward and upward. 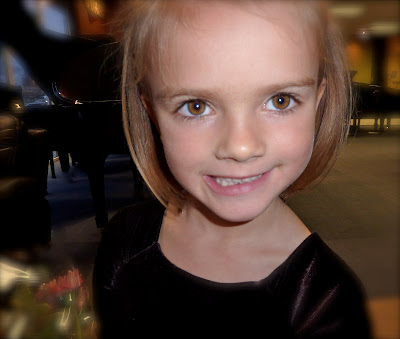 Now she doesn't beg to practice every single day. She would in a perfect world. But she is cooperative and cheerful for the majority of the time, once we get going :) and as long as there is at least a 25 cent reward! 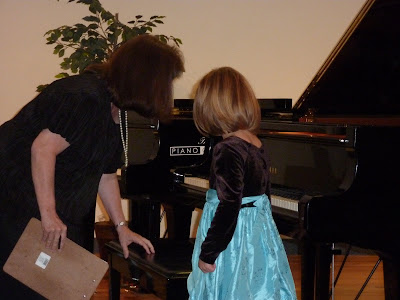 Ellery was first. This is her teacher showing her where to go and what to do a few minutes before the recital began.
I was flabbergasted by the talented young people who performed at this recital. It was phenomenal. In fact our little babysitter, who is only 13, played Prelude III by Gershwin and Wedding Day at Troldhagen Opus 65 No. 6 by Grieg. Wow. Most powerful was to watch Ellery listen to these young people play. Their display of dedication and talent was worthy of her emulation. I never remember hearing recitals like this. A teacher makes all the difference. We are lucky to have found the perfect one for Ellery. 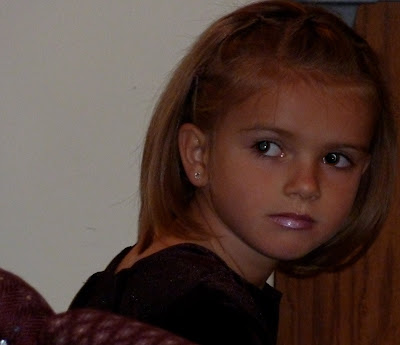 Ellery looking intense just moments before. The glitter lipgloss adds to the intensity.
The Recital Introduction...done in body builder pose :)
Here's what she said in her mouse-like voice:
"My name is Ellery Davidson and I shall play I am a Child of God by Petit, Egyptian Dance by Saint-Saens, The Chapel Doors by Read, and Surprise Symphony by Hayden."
I am a Child of God...this one was absolutely perfect! The bouncing feet are priceless.
Egyptian Dance...this one was a good exercise in keeping going when you find a mistake. She actually played the second line twice, modified the third line and finally got to her repeat and played the whole song through almost flawless.
The Chapel Doors...perfect.
Surprise Symphony...actually this piece was nearly flawless, except in her attempts at dramatic dynamics she played some keys so softly she didn't push hard enough to hear them. Bless her heart.
She ran off so fast she forgot to bow. What a wonderful accomplishment for her very first recital. Of course we got her some flowers and celebrated with some sparkling apple cider and chocolate pudding (made with avacados and agave). 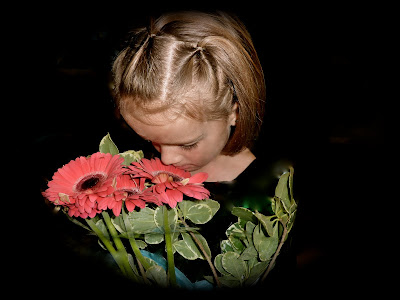 Way to go, Ellery! You too, mom, for your patience and dedication. I am excited to get my boys involved in piano in a couple of years.

Wow, what a talent she has!!! I love the pictures of the many expressions on her face and yes the lip gloss adds to it for sure! Very impressive for such a young girl! I hope to put Savannah in lessons for sure.