An Afternoon at the Movies...

...And a huge reminder why this was the first movie my girls have been to and why we have eliminated mainstream media.
Here is my take on The Princess and the Frog. 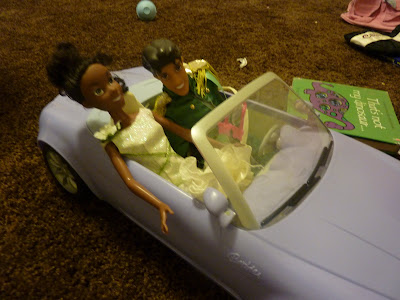 Things started strong. The girls were on cloud nine. Going to a movie with Mom, Grandma and Aunt Amy. This was huge for them. The movie began with the main character as a little girl. Of course this was a huge hit. After 5 minutes she was grown, but that was okay. Then the main plot of the movie was introduced. The main characters would spend the entire movie not as prince and princess, or a pretty singing girl but as frogs.
How did they get that way? Black magic. Voodoo. An evil voodoo doctor sold his soul to the devil. This was so dark I was blown away. I couldn't fathom this was supposed to be a princess musical for little girls. Callista was petrified. Ellery sank in her seat, trying and wanting so hard to like it. But it was too scary. I started to gather the girls to walk out. My mom stopped us. Had I been with just my girls I would have left.
Here were my mistakes. I only read newspaper reviews. There was no mention of Satanic magic or that the princess was a frog the entire movie. I should have looked for independent parental reviews online. Second mistake, I should have gone with my gut and walked out.
I don't mind a villain. And villains can be scary, that's okay. I do take issue with a villain who has made a deal with the devil. And Satanism permeating the entire movie. Shame on Disney. Shame on me for not doing better homework.
(I never should have boughten the barbies for Callista for Christmas without previewing the movie!)
at 12:05 PM

Bec, that's such a bummer. I had heard from a couple girlfriends that this movie is not suited for young children. Isn't that exactly who Disney was advertising this too? It's ridiculous. Stinks that you had to figure that out after you supported it... You wouldn't think you would have to do so much homework before taking kids to a Disney movie, gone are the days!

They have a link to this on our Hurricane theater's website and I use it for all of the movies I let my kids see.

I had the EXACT same reaction when I took the girls to see it a few weeks ago. I was appalled at the darkness of the whole thing. I couldn't believe this was a Disney Princess movie. What happened to Cinderella-style movies, where the bad guy is just a mean step-mom who makes you do lots of chores? I should have warned you (sorry!)

Thanks for all of your input. I will talk to my 12 year old before we go. She wants to see this really bad. I'm not into voodoo stuff at all.

Oh my gosh...that's crazy!!!! I can't imagine a disney movie doing that...wow the previews look totally different! Not that I'd ever take Sav to a movie anytime soon cause she wouldn't make it more than like two seconds...but thanks for the future input. I'm sorry it was such a bad experience and you are so right, shame on Disney!