A Will and a Trust

The next several months Brent and I have the opportunity for some unique time alone. In April, we are headed to the East Coast for 5 days, in celebration of our 10 year anniversary.

June will find us lounging on the beaches of Hawaii with Ellery and the rest of Brent's family. In honor of my mother-in-laws 60th birthday.

I approach these trips with excitement and anticipation. Unfortunately there is a dark side to all of this. Our plane could run into a flock of seagulls and not have as heroic of a pilot, or a random piece of space junk from exploding satellites could fall out of orbit and into our plane. I think we are avoiding the Bermuda triangle, but there are some odd people in NYC and some really tall towers. Who knows.

With this in mind we are revisiting our wills and setting up a trust. Previously, we had used an online site to help us build our wills. This worked decent, except we received them and never got around to notarizing them for the entire year. In light of that we decided to work with a flesh and blood lawyer. Really, sometimes it is just nice to have a warm body to fire questions at. Also we decided to set up a trust, which we currently do not have.

A trust allows us more flexibility and the ability to bequeath our estate to our children under 18 years of age. If we had only a will a probate court would be making the decisions. This could take years, and we can only hope for the best. Not good enough.

Who will replace me?

It is hard to think of who will replace me as a mother. Who will replace Brent as a father. Thankfully I have an incredible older sister. A sister who despite her own five children running around, always finds time to hold my babies. And when she holds them it isn't void of feeling, instead it is with love and affection. A brother-in-law who is a spiritual leader, a provider, frugal and honest. My blessings are measured in the bushels and not stalks! 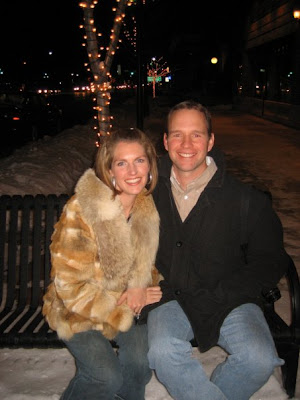 My good sister never batted an eye when I asked her if she would take my children. In fact, in a hopefully non prescient fashion, she told me she was prepared for the call. Just that morning she was thinking of my children, and to offer herself as a guardian. Do you think I should stay home...my goodness!

I even inserted a line that I want a portion of my trust to be allocated to house cleaning, laundry and cooking help for my childrens' guardians. It is a lot of work to try and raise all those children. No one will have to feel guilty for taking money out so a mother can be a mother! Not that I want my children to be pampered...on the contrary I want them to work and cook. But it is important to me some of the burden be lifted of the mundane tasks.

Part of self-reliance is having our affairs in order. This is just one more step. We seek not to be a burden on anyone, in life or death. So if the inopportune stray space trash happens upon us, our children will be cared for.
at 8:43 PM

Wow, Bec! That's so good you did that. David and I have only talked about doing so. Sounds like you have some fun trips planned! And I love Char. She's amazing.

(BTW, I've been making your cornbread and I LOVE it!! It will be a new staple around here. And I was THIS CLOSE to buying agave stuff last night but didn't for the sake of saving $. Today, though, I think I may go back and get some so I can try your V-day cookies. Thanks again for all the fabulous recipes!)

I see how it is Rebecca I was replaced!! hahah I know Charlotte will be the mother I never will be. No hard feelings here.:)