Here is a list of the poems the girls have memorized this year. Young children's natural ability to memorize is phenomenal. Memorizing vocabulary contextually within the poems has proven especially effective for application. A few examples.

The following are excerpts from two of Ellery's stories:

"Once in a night as dark as pitch, the ocean had a huge storm..."
quoted from, The Adventures of Isabel by Ogden Nash.

"Maddie looked in the oven. It was a fearsome sight! The cupcakes were burnt."
quoted from The Dentist and the Crocodile by Roald Dahl

Quote from Callista: "Don't be a twit!" also from The Dentist and the Crocodile.


Poems with a Message

"Careful with Words"
by Will Carleton

"My Kingdom"
by Louisa May Alcott

"Which Loved Best"
by Joy Allison

"The Owl"
by Edward Richards

"The Road Not Taken"*
by Robert Frost

"My Sister Saw a Dinosaur"
by Maryann Hoberman

"The Adventures of Isabel"
by Ogden Nash

"The Dentist and the Crocodile"
by Roald Dahl

"Daddy Fell Into the Pond"*
by Alfred Noyes 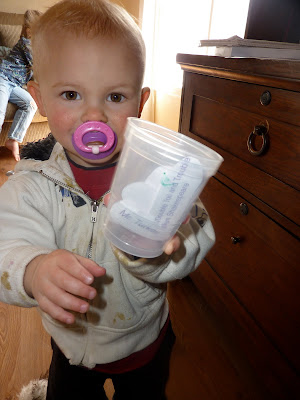 It is a little difficult to recite with this wretched thing smashed into his mouth...
I put these titles in a little jar. The children pick 2 a day to randomly recite. This has ensured they commit them to long term memory. If you need any of these poems in their entirety, just email me!