We are a house full of big thinkers this weekend. Birthdays, Doggy Appetizers, 23 mile mountain runs,Ideablob,and European distributors. Our family was dreaming big. 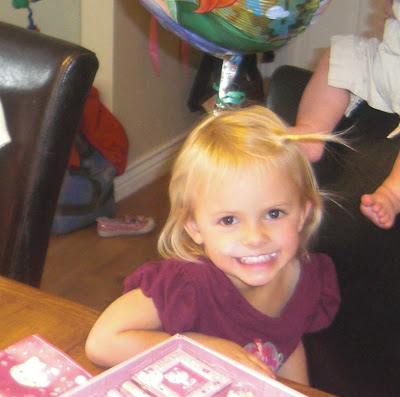 Let's start with little Pip. She turned 3 years old today. Although she, and the rest of the neighborhood gang, officially act like she is 6. Thankfully we now have a 2 year supply of lip gloss. Apparently, she told everyone she knows she wanted lip gloss for her birthday. Our entire house is now covered in a thin, some places thick, film of sparkly lip gloss. This includes Emmy's large bald head and the inside of his ears. My little Pippy is BIG on personality and smiles. She is convinced she is Shawn Johnson and Hannah Montana combined. All she knows about Hannah Montana is that she is a rock star...and Callista is certain she is a rock star too. I am trying so hard to keep her little and shield her from Hannah Montana....for heavens sake she is only 3! 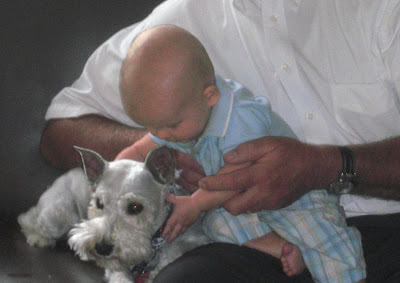 On to Butter Bean. Little Emmy had his little heart set on a big prize today. It isn't totally clear from the picture but Emmett was intent on eating Brimmy. Those large ears just looked so luscious he couldn't resist. Poor Grandpa and had to keep him from sucking the little dogs ears. I think Brim emerged soaked in slobber but otherwise unscathed. Why settle for rice cereal when you could have a little schnozer?

Myself...I accomplished a feat I think anyone can feel proud of. I successfully ran the "Hope to Hobble" 23 mile run. The intensity and exhilaration of this 3:30 minute run were amazing. I actually felt great the entire run. Compared to this beastly 2000 ft, 12 mile climb, and rocky 11 mile, 3000 ft descent, the St George Marathon will be a piece of cake. Bring it on.

I will confess to some serious lactic acid build up in the legs today. But, besides that, I am none-the-worse for the wear.

Secondly, I have entered another contest. This time on ideablob. I need everyone's help on this one. It is basically a popularity contest for a week. Your idea garners the most votes and you become a finalist for the month. The last week of the month there is a show off between the top 8 ideas. To the winner...$10,000. Not bad. I would love your votes for me and all your friends votes as well. Here is the link. Vote for Cap Trappers. Don't worry I will keep reminding you, on email, blog, facebook... :)

Finally, I got an interesting email from an international distributor. He wants to introduce Cap Trappers to his side of the world. Chief strategist Brent was spurred into action and spent the weekend identifying major European distributors to contact. The first several years of his business, their growth outside of the US was far greater than inside. An interesting was to think big. Globally.
at 9:19 PM

Congrats on your run! That's awesome. And Happy B-day to little Pip! I love that she got tons of lip gloss. =) The scary thing is Bryan would have loved to get the same thing when he turned three!