Berkeley had her first big ride last night about 9 pm. We didn't have our camera so we couldn't capture the amazing contraption which nested her snugly inside the ambulance. But she did get a souvenir! 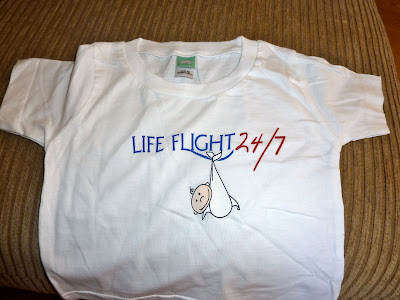 Berkeley was transferred to Utah Valley Hospital last night to their Level III NICU. It wasn't because she had digressed, thankfully, only that if she did AF would not be equipped to care for her. Better to transport while stable than in crisis. The neonatologists at UV felt strongly they wanted to be in charge of her care.
I experienced quite a bit of trauma with this change. Thankfully they let me hold her for 1 1/2 while still on her CPAP before she transferred. It was very soothing for both of us. Also, our wonderful nurse Julie, transferred with us, which made the transition much easier. At this hospital the neonatologists are directly watching her 24 hours a day. And the good news, she came off CPAP (Continuous Positive Air Pressure) again. She is once again on a high flow canula. She is also still receiving oxygen. 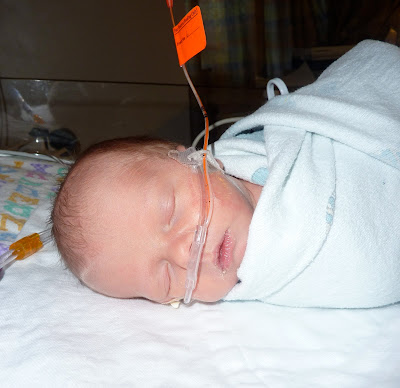 I can't begin to try to feed her until the reduce the air flow in her lungs. Right now, if she tried to suck, she could aspirate into her lungs. The neonatologist is convinced she has pnuemonia. They are treating her for that. I doubt there has ever been a mother who would be grateful if her child had pneumonia, but I would be. For me it would be a miracle if her cough and secretions disappeared in a week. I am so skeptical though.
My frustrations were high yesterday with all the doctors. I'm afraid I vented a bit. It made me so unsettled as I spoke about Ellery and Emmett and discussed similarities. They felt like a persistent, wet, productive cough could be very dangerous long term. The pulmonologist at Primary Children's who was so unkind and dismissive 2 years ago, suddenly wants to talk to us, and see Berkeley and the children.
My fear with Berkeley is that like Ellery and Emmett, she doesn't have pneumonia. All the bacteria cultures have been negative so far. I think as time passes and her strength increases she will begin to breathe on her own without help. She will learn to eat. And they will send her home with a thick, wet cough and assure me it will clear up in a week. Then it never will.
I thought I had found peace with this. But the passing comments of the doctors have raised all the same fears I have had for the past 7 years. It is a difficult time.
But on a lighter note, look at that beautiful head of hair on my little Berkeley Rose. And she is little. Still losing weight, but that should turn around soon. 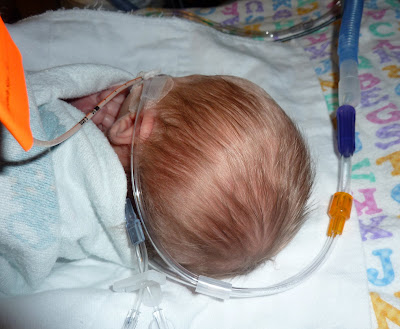 We are so grateful for all the prayers and fasting on our little Berkeley's behalf. Thank you. It has been so wonderful to take a step forward instead of back!
at 12:26 PM

Oh my goodness, you poor thing!!! I should have started with this post instead of going to the first one..sorry about that! Poor little thing, I was hoping to hear all was home and well! I'm glad they transferred her, sounds like she'll be closer watched...but those doctors who listen and then choose not to, can't imagine how frustrating that is! Hang in there, again our prayers are with you all and especially your little angel who will fight through this. Keep us posted!! Love and hugs being sent your way!

Wow, hang in there Bec. You're an amazing mother, and Berkeley's so lucky to be yours. I'm glad she's being well cared for, and hopefully you'll get some questions answered soon. She does have beautiful hair and such a sweet face!