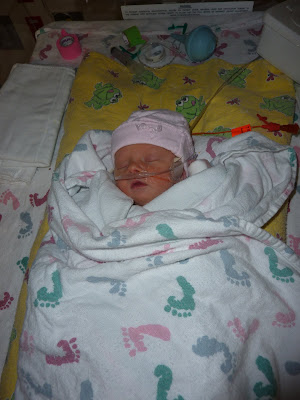 Here I sit blogging, still in the hospital. Little Berkeley is well but still very weak. As the days have progressed, the fluid has begun to build up in her little body. She doesn't have the strength to move it through her. She is back on oxygen, and the respiratory therapists are helping her manually to clear her fluid. The doctors were worried she had pneumonia, because of the chest rattling and thick wet cough she has developed. I explained to them how Ellery and Emmett both have Primary Ciliary Dyskenesia and their history as babies. I was very impressed at the doctors knowledge of this rare genetic condition, and...he actually believed me. Berkeley's lung xray today showed a partial collapse (just like Ellery) which the doctor said is classic of PCD. (If only I had known what I know now, when El and Em were babes! It releaves so much stress and helps the doctors know best how to treat her.)
No timetable yet. She is off her IV (hooray) and they inserted a NG tube (from nose to stomach) and are feeding her my breastmilk. She is tolerating it really well. Still losing weight but not under 5 lbs so that is a really good thing. The waiting game is mostly when she will decide to suck and eat. The oxygen is no big deal. We can bring her home with that. We've done that before :)
Brent and I both had really hoped little Berkeley would get Callista's genes and be free from this, but we count our blessings as well. Of all the genetic conditions in the world, this one is mild and not life threatening. The most dangerous are these first couple months. But we are confident she will be as strong and healthy as her big sister and brother.
I will be released tomorrow, so will have to start camping out in the parent lounge. Thanks for all the thoughts and prayers. She will be just fine. The PCD won't be a problem and the eating will come with time.
at 3:23 PM

Thinking about you and little Berkeley. Praying for her strength and a few good meals :)

I was hoping she would get C's genes too. It is such a blessing you are a proactive mommy and had it all figured out so you could direct the Drs. We will continue to keep little B in our prayers.

Rebecca,
I just want you to know that you there are many fasting and praying for Berkeley Rose (a beautiful name for a beautiful girl). We love you and your family!
Terri Jacob

I hope you didn't get this twice.

What a blessing that you can take your little angel home having been through this before, knowledge is power isn't it? Poor little thing, she's in our prayers and I'm so glad the doctors listened to you..I hate when they have no respect for a mother's judgement/diagnosis! What a strong little girl you have as well as your other children having to endure that right after entering this world. Prayers are with your family!