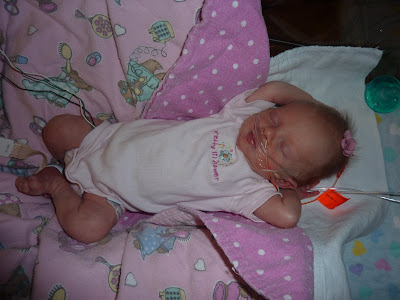 I mentioned yesterday my frustration was mounting with this hospital and NICU. It seemed every time I went to visit my baby she was in some sort of distress the nurses weren't recognizing. Last night, when Brent and I arrived at 10:30 pm, she was de-sating, and respirating quickly. Her oxygen level had been turned very high and the flow was up.
I patiently asked the nurse how she was doing, trying not to do her job for her. Oh she is doing just great, was the reply. I unwrapped her blanket, and lifted up her onesie. She was severely retracting. As patiently as I could, I called her back, and told her maybe I was just an over-reacting parent, but it appeared she was really struggling to breathe. Immediately, people started moving. The respiratory therapist was called, the doctor was called, an x-ray was ordered. She was going downhill fast. 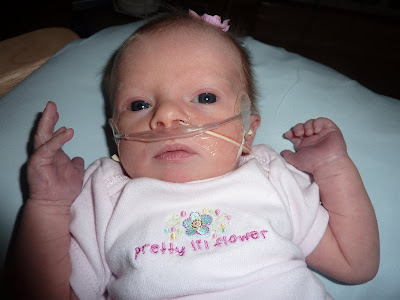 A long story short, the neonatologists are paying very close attention now, and researching like crazy. They now realize little Berkeley is unlike the other preemie babies they see daily. She looks stable, but is actually not. As her secretions build up, her respiratory distress increases. Sometimes it happens very quickly, while she looks very peaceful lying there all wrapped up in her blankets.
After deep endotracheal suctioning, she stopped retracting and her oxygen needs plummeted. The pattern is clear. The problem is the deep suctioning is very invasive and dangerous. It can cause inflammation and make things worse. The doctors are trying to find the right balance now, by using the Baby Booger Getter (BBG) more frequently and nasal saline drops every 6 hours. 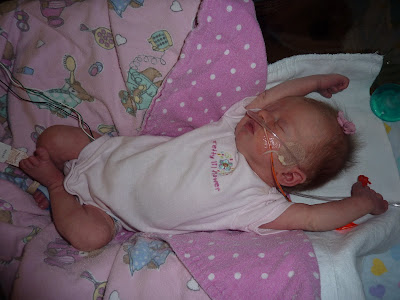 They will try to have a primary nurse for Berkeley so the care is as consistent as possible. Last night the neonatologist assured us, they wouldn't send Berkeley home until they were confident she wouldn't end up back in the hospital. They feel strongly all three children should be followed by the pulmonologist at Primary.
Although I have known for some time, my children suffered from PCD, it was difficult to hear the doctor stand there and go through the long term implications.
The Lord gives each of us different lots and lessons in life. I don't know how severe little Berkeley Rose will be. Emmett isn't as effected as Ellery, I know there is a large spectrum in this illness. We are praying, it is simply the lack of strength in her body, and not the severity of the disease complicating things for her. I treasure my children and can guarantee they will have lives full of vigorous exercise and encouragement to "cough it up."
We want them to not just thrive in childhood but thrive into old age. And believe me, Ellery and Emmett are THRIVING. At last, finally someone listened to me. Finally my children will have someone checking in on them, helping us have the peace of mind, we are doing everything we can for them as they grow older. Thank you for your thoughts and prayers. Hopefully little Berkeley can begin to move forward now that she is being properly watched and cared for.
at 11:54 AM

The Lord blessed these children with you as a mother. Your keen observation and devotion are gifts from Him. It sounds like the pieces are starting to come together day by day. Praying for the whole Davidson family and sending oodles of love!

Rebecca, I've been following your blog, and keeping Berkley in my prayers! She is beautiful and so sweet, and we hope she grows stronger day by day. I put her name in the Washington Temple today. Hugs!