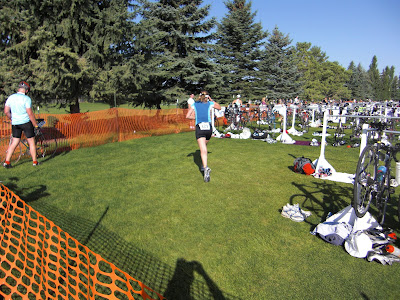 Headed off to for the 10K run.

Back from the spudman, and now in California! Results: I definitely didn't win but I did end up with a PR (2:21)! I beat my time by over 5 minutes. I have to feel good about that. I still have a lot of room for improvement. I ended up in sixth place in my division and top 20 overall for the women. 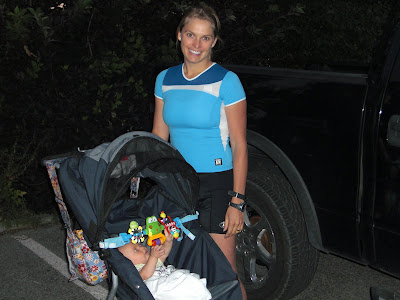 Me with my littlest fan in the wee hours of the morning before the race.
A couple things to think about:

Panic Attack--The very first leg is a swim. I was extra cold for some reason. I am about 1 of 10 people out of 2,500 who don't wear a wetsuit The race started in the river, and I had panic attack. It has never happened to me before. My heart started racing, a felt like I couldn't get a breath. I thought I was going to have to quit, and swim to the shore. I don't scare easily. I was afraid. I did the breast-stroke with my head above water for probably 5 minutes. After that time period I felt like I had some control. I swam a couple strokes and then breast-stroke. I just kept thinking...make it to the end of the swim....it's just 1 mile...I got out of the water and I actually felt okay. So I went for it.


Drowning--At the end of the race, I was made aware of a tragedy just minutes after my swim. In the following heat a man drowned. The race had to be stopped as they searched for the body. He was swimming; called for help; raised his hand, and went under. The women beside him could not get to him fast enough. Neither could the safety boats. A 50-something man...in great condition. Life is so tenuous. At any moment we could lose it. Or someone we love. 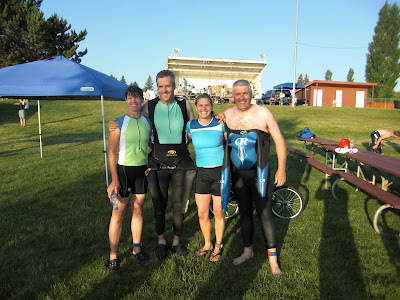 This is the "tri-kids on the block" crew. My neighbors and I.

(On the right and left, their heat the swim was canceled after the drowning. My neighbor was in a panic because her husband was in the heat following mine where the drowning occurred. She ran to the transition and found some peace to see his bike gone.)
A big thanks to my husband for his support. And to my mom and dad. They took the girls camping. I can't believe how brave they are. Brent and I haven't even attempted that. They were extremely dirty and tired but had a blast.
at 9:13 PM